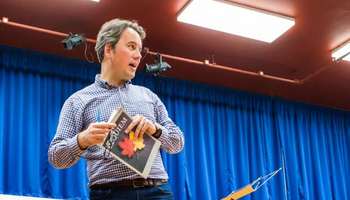 Our Musical Director is David Pipe. A former Assistant Director of Music at York Minster, he now works in the Diocese of Leeds as Director of the Keyboard Studies Programme and Cathedral Organist.

He is increasingly in demand as a conductor, workshop leader and adjudicator. His skills, good humour and positivity have made the YMS annual choral workshop a roaring success; each event gets booked up quickly with singers from around the region, and beginners wanting to have a go, all coming together to enjoy a day of singing.

David read Music at Cambridge University as Organ Scholar of Downing College, later studying organ at the Royal Academy of Music. He is an examiner and member of the Academic Board of the Royal College of Organists, and Head of Organ Studies at the University of Huddersfield. In addition, David is founding Artistic Director of the Leeds International Organ Festival.

David has given organ recitals at major European venues, as well as during tours to the USA; festival performances as soloist have included the Bergen International Festival and the St Albans International Organ Festival.

He appears regularly as organist and conductor on national television and radio, and has made numerous recordings as organist and continuo player, including a solo recording of original organ works and transcriptions by Liszt and Brahms, and a disc of organ music by Huw Morgan. David’s recordings have attracted critical acclaim in the international music press, with the performances described as ‘electrifying’.

In 2018, David was elected Associate of the Royal Academy of Music, awarded to past students who have distinguished themselves in the music profession and made a significant contribution to it in their particular field.